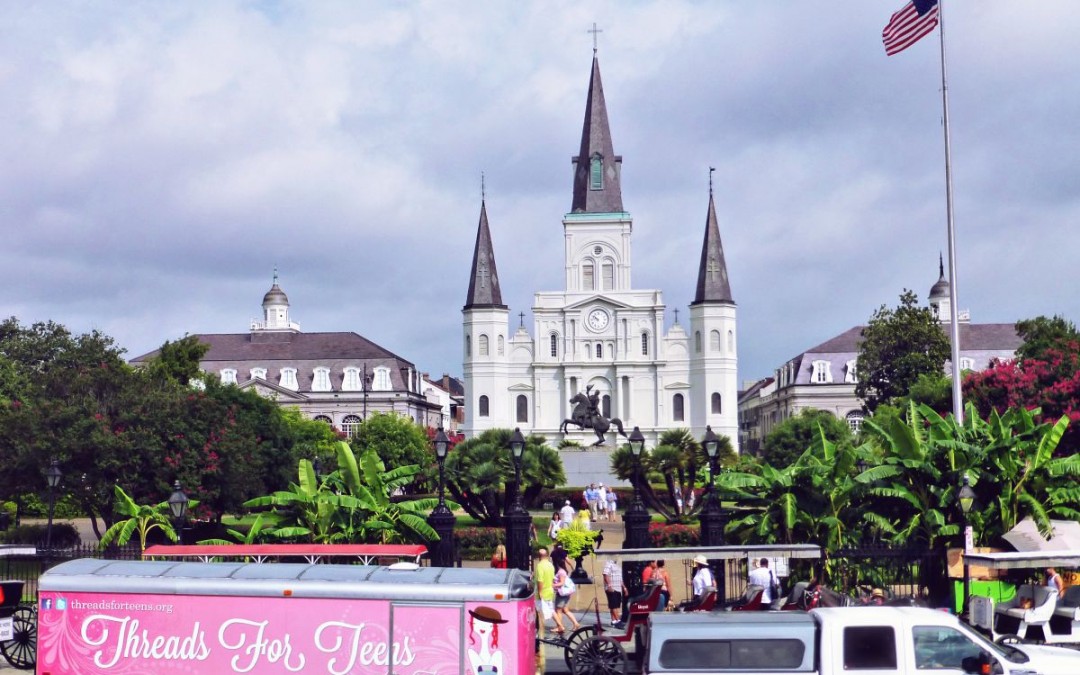 New Orleans was a crazy incredible stop. We missed stopping there last summer, so we were super excited to come into town this year. Our New Orleans journey dates back to Friday morning, after our stop in El Paso. Everyone already knows this, but I just want to reiterate that TEXAS IS MASSIVE. First of all, the drive from El Paso to New Orleans is a TWENTY-HOUR DRIVE. We decided to split this into two segments. We first drove from El Paso to Austin. This took such a long time, there was no cell service or radio stations the majority of the drive, and we were really just surrounded by desert. It was a boring drive to say the least. Side note—I am currently traveling with my mom and Grandpa Gus (he drives!). We spent the majority of the drive talking and catching up, which was great because I am not able to spend much time with my family now that I go to school in Philadelphia. The drive took about NINE HOURS. We rolled up to our hotel extremely late at night, around 1 am. All of us were beat. The next morning, my mom and I woke up early because we needed to fly out to New Orleans a little bit earlier in the day. At that time, Grandpa Gus also woke up to make the second part of the drive.

Unfortunately, when we go to the airport, our flight was cancelled due to bad weather! My mom and I were super bummed out because we had woken up so early to make our 8:00am flight. Thankfully, we found a new flight on Southwest We ended up landing around 1:30pm into a thunder and lightning storm! As we came to find out over the weekend, New Orleans’ weather is extremely temperamental. We spent the rest of our day working on some TFT stuff, and then a little bit of sightseeing. My mom and I were able to see her friend Sean from high school. He took us to a great restaurant on Magazine Street called Rum House. I had a really amazing pulled pork sandwich with sweet potato chips. After this, we met up with Grandpa Gus who had spent a long day driving. He said there was a lot of bad weather along the way, which made the trip take even longer. We dropped the trailer off at our location for the next day and then headed for the hotel were we again all passed out from exhaustion. 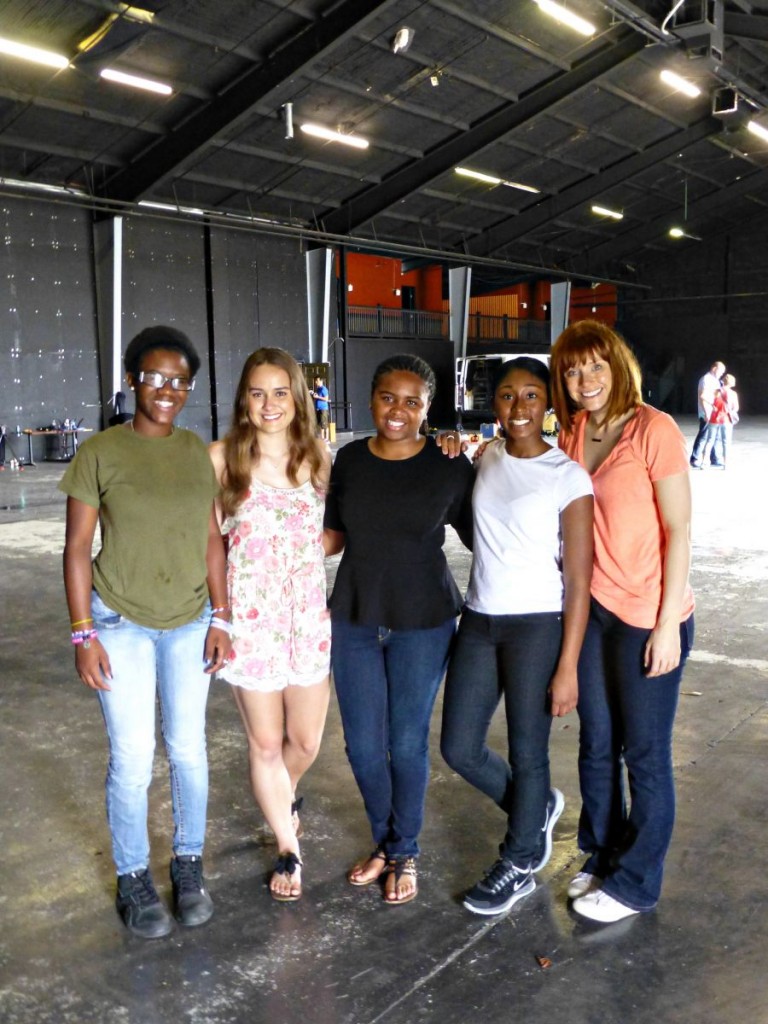 Bryce, Allyson, and the girls in New Orleans.

The next morning, we woke up bright and early to set up for our shopping appointments for the day. A highlight of the day were three girls who came from an organization in NOLA called The Pink House, which is an organization to empowering girls. The girls all had a blast choosing their items. Also as a little bonus, Bryce Dallas Howard, she’s Victoria from Twilight and Tilly in The Help, was there helping. When the girls found out, they all became a little starstruck! Also at our shoot were two awesome people, Hailey and Rob, who were so incredibly nice. Hailey did a little bit of makeup for the girls and Rob did hair. Before we left for the day, Rob even braided my hair into a gorgeous crown. I wish I had a personal hair stylist like him to travel on the entirety of the tour (who doesn’t!?!). After all this, we finished the day in New Orleans on a high note, after a long 13.5 hours of working! 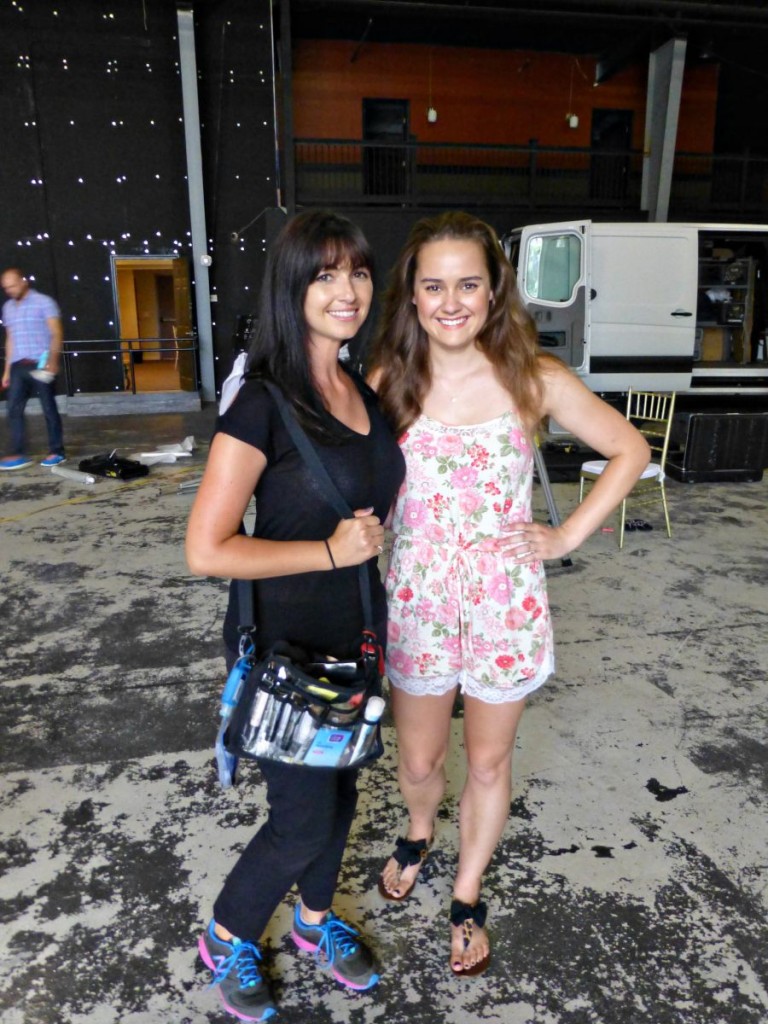 With Hailey, the hair stylist in New Orleans. 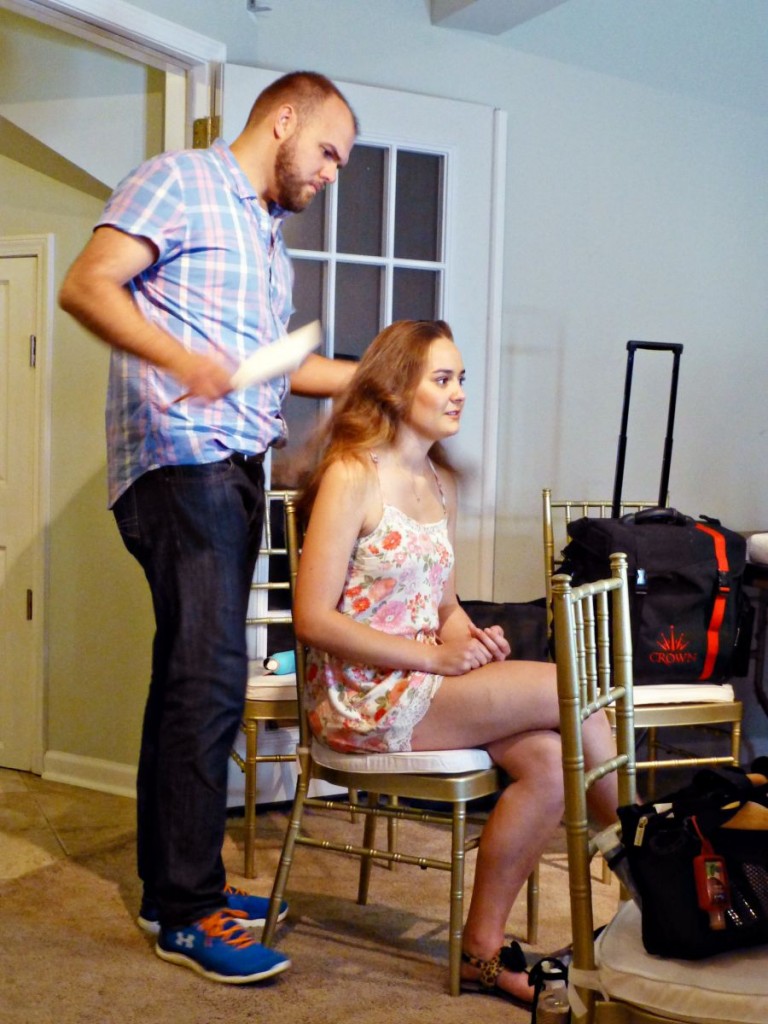 Robert from Moroccanoil doing my hair! 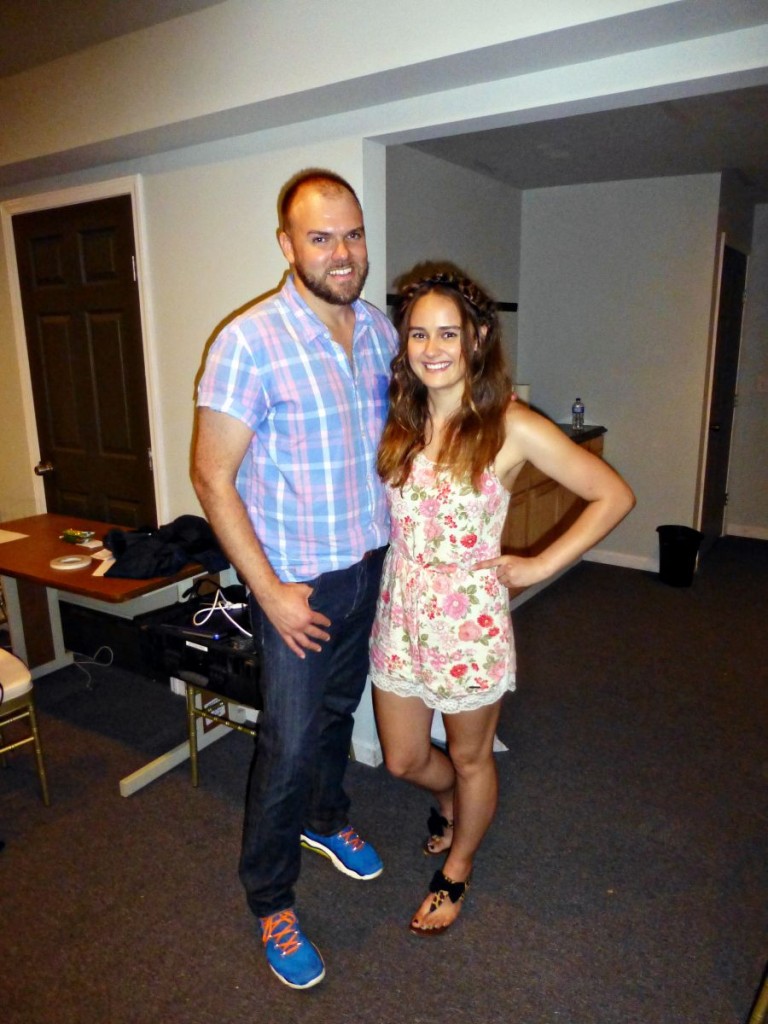 Look how fun! Robert braided my hair into a hair crown. 🙂

We then went to check into our hotel for the night, The Roosevelt, who so kindly hosted us in one of their LUXURY SUITES. The room was insanely beautiful and luxe. After checking in, we went to look for food and found ourselves on Bourbon Street. Now, I am sure Bourbon Street is quite the party any day of the week, but being there on a Saturday night was quite the experience…we all enjoyed grabbing beads that had fallen on the street. I shared shrimp and red beans and rice for dinner with my grandpa. 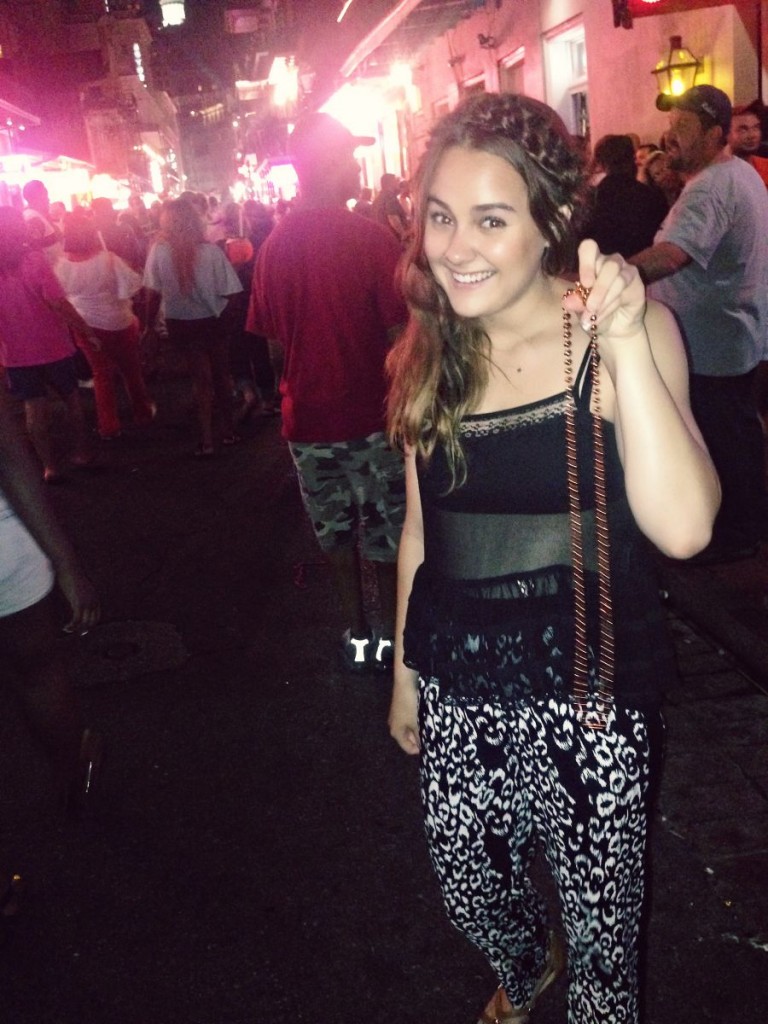 Fun with Beads on Bourbon Street in New Orleans

The next day, we still had some time to look around, so we woke up bright and early to head to the famous Café du Monde. My mom and I shared some of their famous beignets, which were fabulous! The beignets were covered in powdered sugar that melted on top of them because they were piping hot, fresh from the oven. Just typing this makes me want to go back to eat more. We spent maybe an hour long walking around the French Quarter. I definitely want to go back to NOLA sometime soon and be able to actually spent time exploring the city. 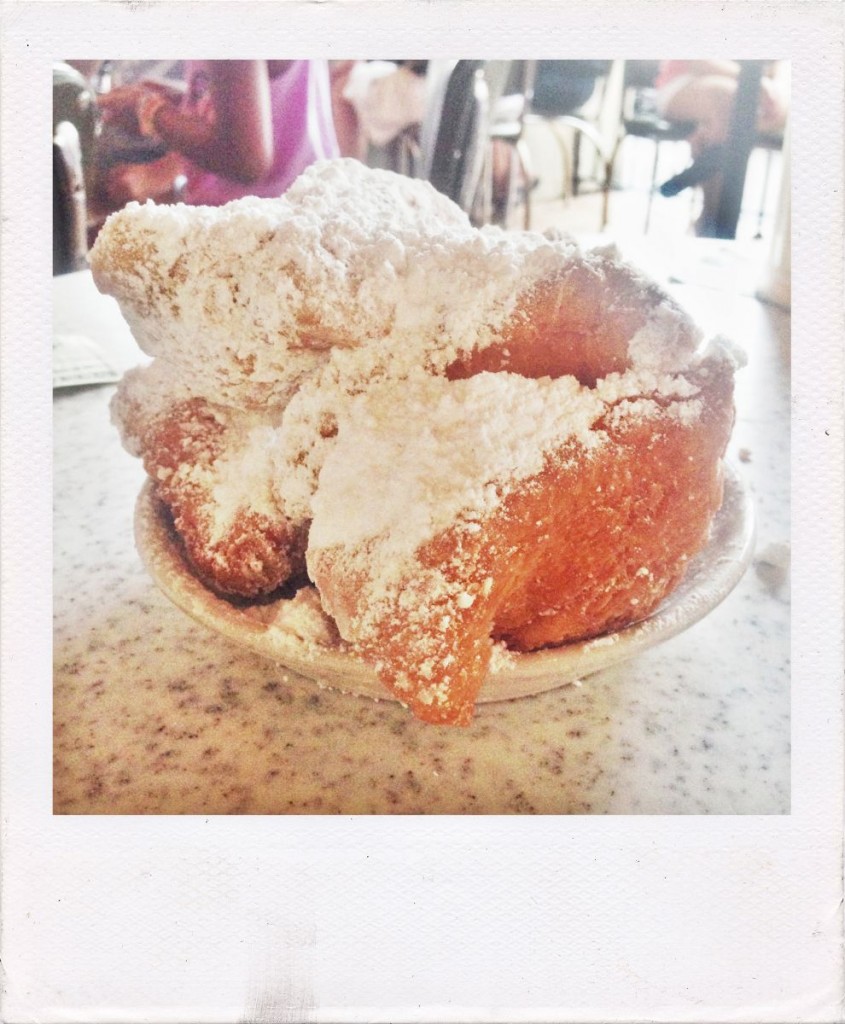