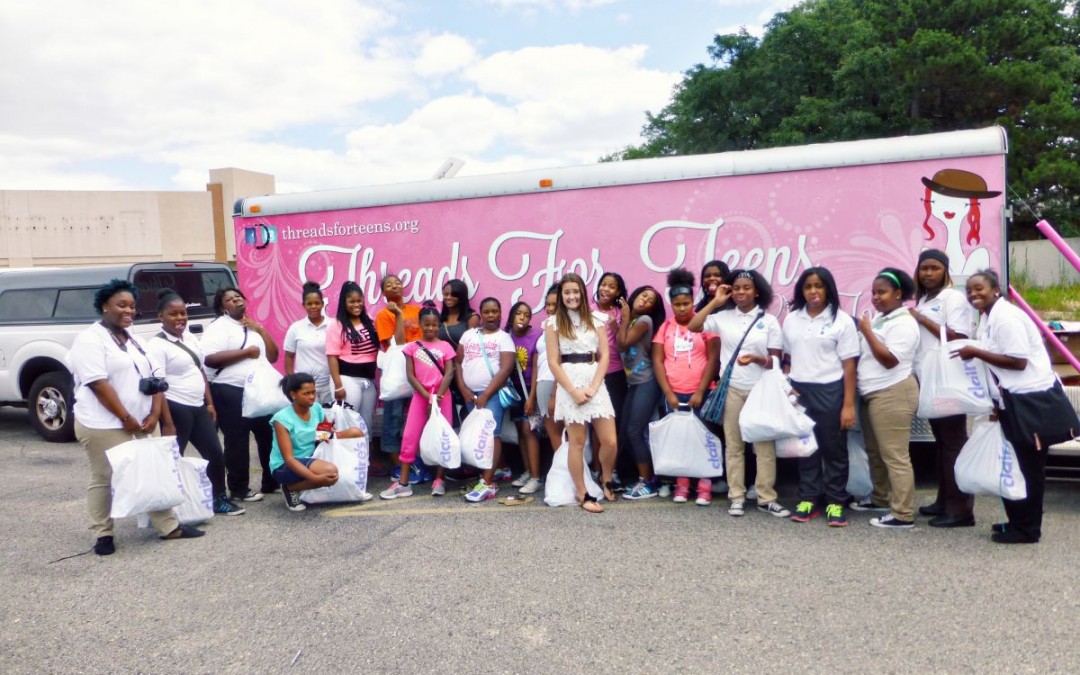 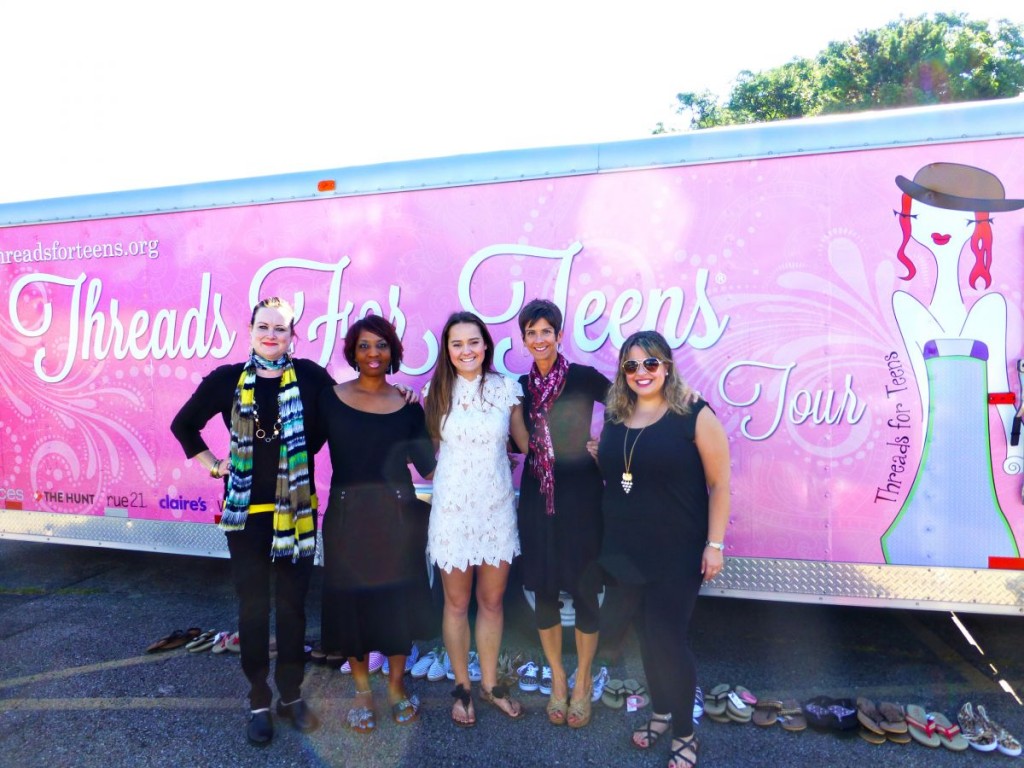 Allyson with Claire’s volunteers in Detroit!

Last year in Detroit, we had such an amazing turnout. All of the girls who came were so grateful to be at the mobile boutique and truly interested in Threads for Teens and how it was started. When scheduling the tour, I made sure to make a stop in Detroit because of the girls from the Matrix Center. The day started off slowly. Several girls referred by the Ennis Community Center came at the beginning. 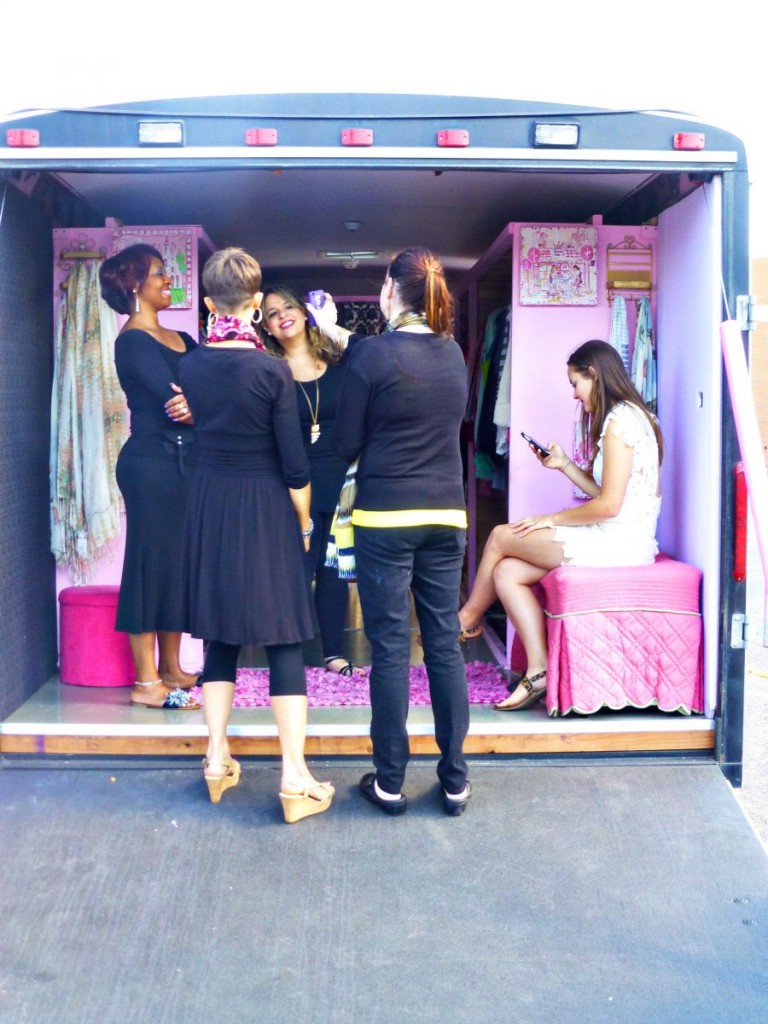 Waiting for the first bus load of girls to arrive 🙂

Before this, once again we had our Claire’s volunteers! One of the ladies, Monica, volunteered at the Threads for Teens stop in Detroit last year, so I was excited to see her again. The other women, Maris, Timarie, and Jill were all also extremely helpful. We got the truck set-up in no time!

After our first girls from the Ennis Center stopped by, we had to wait about an hour before the Matrix Center literally brought a large yellow school bus filled with girls! As they were driving up, I could see the smiles on their faces from the excitement. They all got out, and quickly got in line. They were all so looking forward to come in that I could tell were eager to not be in line. In fact, sometimes I would grab stuff from boxes and girls would ask me to hold onto that stuff for when they got their turn.

Many of the girls had come to Threads for Teens last year, so it was nice to see some familiar faces. I enjoyed catching up, and even hearing that many were going to college or just had completed their first year at college. Since I just finished my first year as well, it was nice to have that small bond. Many of the girls expressed their hopes and dreams for the future, which amaze me. I find it so refreshing when anyone dreams big. In interviews I have stated many times that I strongly believe that if you work hard enough following your dreams, you will achieve some sort of success. When Threads for Teens was first thought of it was supposed to be a onetime clothing drive; however, it continued to grow and surpass all expectations I initially had for it. Please please please think of me at fourteen not knowing what I was doing, but making small steps toward it, when you may feel doubts about doing something. Think of many of the girls who came today, who may have not been from the best situations, but were still extremely hopeful for the future.

If anyone is from the Detroit area and looking to get involved with teen girls, please consider checking out the Ennis Community Center and the Matrix Center. 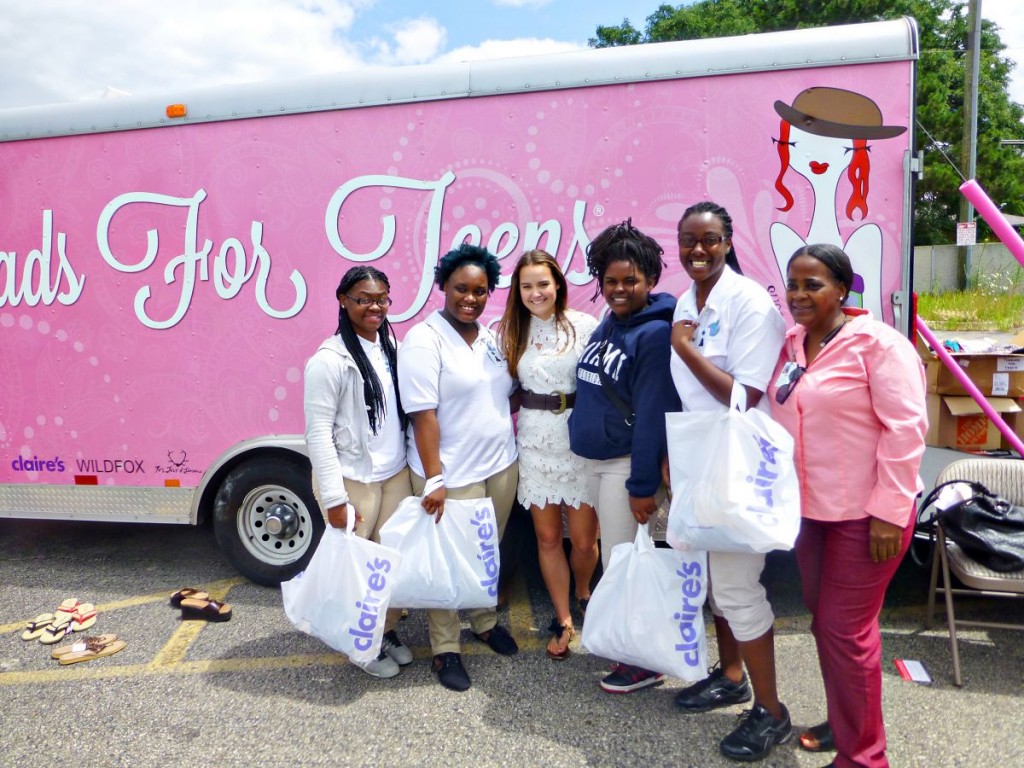 A different kind of photo being shared today, more about it in a bit. Detroit was where we stopped, and while it is out of our way as far as our driving goes, we had such great girls last year that we had to make sure to include them againfor this tour. 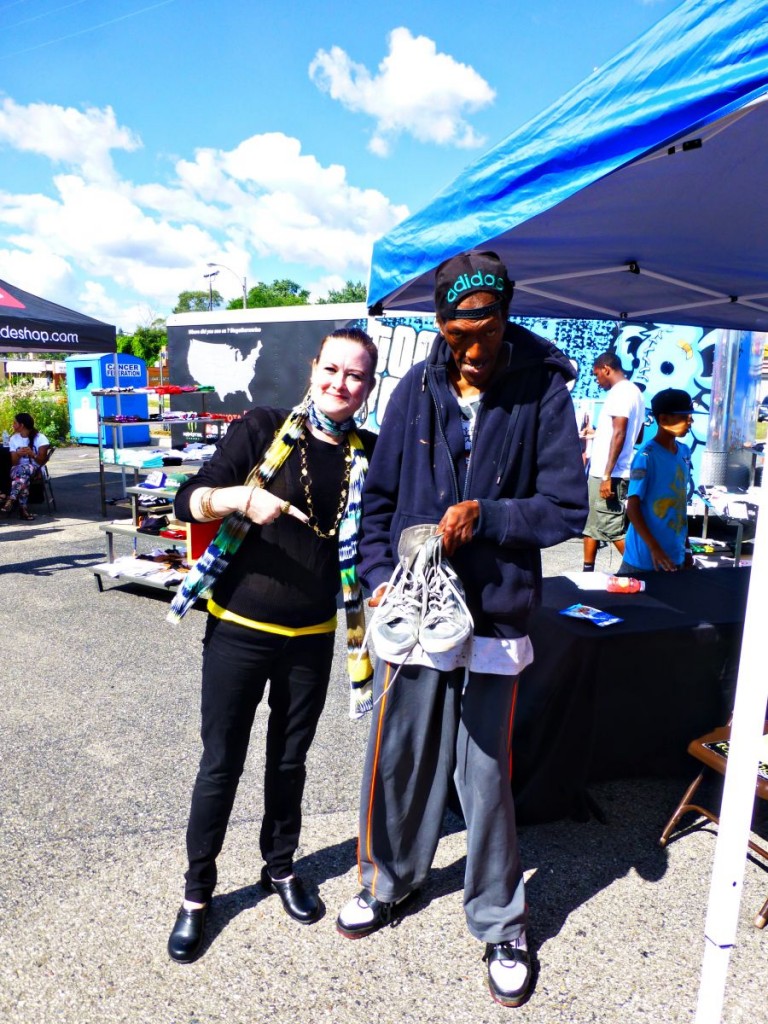 With his silver shoes!

46 girls came today, most in a big yellow school bus, and many that came last year. After the event last year, Allyson spoke to the girls as a group and answered all of their questions. These girls were so excited to be back this year and many said Allyson is their mentor and role model. Many girls graduated from high school this year and are so excited to be heading to college. They told us that
they know they can do and be anything because if a 14 year old girl was able to start something so big, then they can follow their dreams too. They were hugging Allyson, taking photos with her, and one of them following her around “helping”. (Her name was Alice and she loved how close it was to Allyson.)

These are girls from some of the worst situations you could imagine, but they have hope and are going to break the cycle they’ve come from. This tour is difficult and a lot of work for us, but hearing these beautiful girls excitement truly makes it worth it. I don’t even know how to put it into words.

Now back to the photo. When we arrived to “8-Mile” this morning, this guy offered to be my personal bodyguard for all of $4 cash and another $1 to buy a coffee. Instead, I showed him this pair of silver high tops in just his size. None of us know where these shoes came from, they just appeared a couple of days ago. Men’s size 13. They fit perfectly and he told me he has a silver jumpsuit that they’ll match. He also told me with tears in his eyes, “thank you so much, no one never gave me nothing for free.”

All in all, a most fabulous day in Detroit, a city I’ll never forget with girls that have deeply touched my heart two years in a row. For now, we’re off to Columbus, OH to meet more amazing young ladies.

Yesterday’s stop was in the “8 Mile of Detroit” . If you have watched the pawn shop series, Hardcore Pawn, that takes place in Detroit, we were in a vacant lot next to a community center right in the heart of the area.  Lots of very deserving young girls, anxious and grateful to receive five items of new, in style clothing including shoes and accessories. We even had one guy come by who offered to be a body guard for the day’s activities for $4. Amy gave him a pair of size 13 silver moon boots that had appeared from nowhere and fit him perfectly. He said that it would go perfectly with his silver jump suit. He left, very happy, as he said that no-one had ever given him anything, and promised to come back in his silver outfit. We did not see him again – too bad!  Since there was ample security at the day’s event, I slipped out for a a couple hours to fulfill one of my Bucket List items; The Henry Ford (museum). Note that I actually used a capital F in the word Ford, as this is one of the most fantastic museums I have ever seen, and worth a couple of days, not just the two hours that I spent trying to jamb 150 years of industrial history into my short stay. If you are ever even close to Dearborn, make it a destination……..